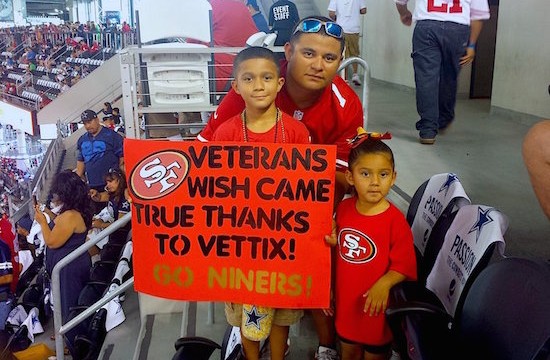 The Veteran Tickets Foundation is a military charity with a remarkably straightforward mission: they distribute tickets to concerts, sporting events, performing arts and other family activities to active duty military, veterans and their families (and the families of those killed in action) via their VetTix​.org website.

The organization works with promoters, artists and teams to pair seats that might otherwise go empty with its members. They also accept individual donations and provide once-in-a-lifetime experiences via their Hero’s Wish program.

VetTix was founded by veterans Mike Focareto and Eddie Rausch after they sat next to an empty seat at the 2008 Super Bowl. The charity has grown quickly and has distributed over 1.1 million tickets in all 50 states and the District of Columbia.

Many of those seats go to families who could never afford to purchase them on their own. VetTix may not be focused on the biggest issues facing men and women who serve, but the organization is creating opportunities for military families to have the kind of shared experiences that create lifetime memories.

Eligible military members can sign up for VetTix here. Those interested in supporting the organization can donate cash or tickets.

We talked to Mike Focareto about the history of the Veterans Ticket Foundation and how they get all those tickets.

Explain VetTix to our readers.

VetTix is a nonprofit that collects tickets to sporting events, concerts, theaters, plays, basically anything that takes a ticket to get into. Those tickets get donated by season ticket holders, organizations, individuals. We get those tickets in the hands of currently serving military and honorably discharged veterans. That’s honorably discharged veterans of all eras, so we have people on our site from World War II, Korea, Vietnam, as well as those who served in the current campaigns. We also give those tickets away out to families of those killed in action.

We’ve given away around 1.1 million tickets across the United States. The estimated face value of those tickets is about $48 million dollars. When we look at the total number of veterans and military that VetTix has served and we figure an average family size of four and divide that into 1.1 million tickets, we have actually served 275,000 military and veteran families.

There’s an almost infinite supply of tickets available to you. There are always going to be new concerts and sporting events. You’ve got a lot of opportunity for growth.

Yeah, it’s been growing phenomenally. This year alone we’re going to give away over 400,000 tickets. Last year, we were at 275,000 tickets. So each year, we grow and become more efficient at getting those tickets in the hands of those that we serve across the country.

And not only that, but tickets are our only mission. We’re not diluting our mission in any way, shape, or form. Our mission in 2008 was tickets and it’s tickets in 2014. We’re hoping to get over a million tickets a year within the next two years.

How did you get the idea to start VetTix?

My buddy and I were at the Super Bowl here in Phoenix in 2008. We had friends that were on the field doing the Color Guard for the game. We found out that once the Super Bowl starts, those people are escorted out because there’s pretty much not a place for them to sit. Basically, they were just there for fluff at the beginning of the game. We sat down in our seats and the seat next to us was empty the entire game. My buddy is a Marine, I was in the Navy, we both looked at each other and said, “You know what, someone should have donated that ticket so a person that was part of that Color Guard on the field could have enjoyed the game.”

The next day, we went down and filed the paperwork for the nonprofit and that’s the beginning of it.

We couldn’t believe there weren’t other nonprofits out there that accept tickets and give them away as part of their mission. Our mission is to provide these military families with opportunities to go out and have a good time. It helps people who served reintegrate with society and reintegrate with their families.

It also lets them know that their supports them. Once they realize that the community supports them, they then support this community. Its a full-circle win. We always like to say that VetTix is a charity that wasn’t created to fix a problem. We are just saying, “Thank you for your service,” whether it’s my father in Vietnam, whether it’s my grandfather who was in World War II, whether it’s my uncles who fought in Korea. It’s never too late to say thank you.

There’s a saying in the concert business: there’s nothing more useless than an empty seat after the show starts.

We work with a lot of concert promoters. Sometimes Kenny Chesney will donate a thousand to two thousand tickets a show. Basically, it gets down to the fact that these tickets aren’t selling. Many times, they’re the high-priced tickets, so we just collect the names for Kenny Chesney’s management and they just plug holes as our people show up. Not only is Kenny playing to people in the front row now and a fuller house, but we’re also providing an opportunity for someone to sit in a $400 or $500 seat that they would have never been able to afford that on their $20,000 a year salary.

That’s why we’ve grown so fast. I mean we’re averaging 500–600 people signing up a day. We’re in the top 10% as far as military charities in the combined federal campaign. We are one of only 150 charities listed at OurMilitary​.mil, which is a community service for military resources that basically says you’ve got nothing wrong with you, you’re transparent, everything is good about you. They list us there. We’re one of the top-rated veteran nonprofits, higher even than Wounded Warrior and Soldier Angels.

We service all branches, currently serving, honorably discharged. We didn’t do any type of discrimination. It’s not just post-9/11. It’s not this or that. We tried to just make our mission very strict and our base very broad.

If you look at our website, you’ll see that we have over 39,000 testimonials. We encourage our members, after they go to the events, to enter a testimonial two weeks after the concert or play or football game. We automatically collect those testimonials and send them off to the donor and say, “Hey, this is what your tickets meant, please consider us in the future,” and it’s just snowballed.

I joined the Navy right out of high school and went into the Naval Nuclear Power Program. I was a Nuclear Engineer and served during the first Gulf War on the USS Virginia. I come from a military family: my father served in Vietnam, both grandfathers fought in World War II, my grandmother actually built tanks in Euclid, Ohio, during World War II. After I got out of the military, I moved out here to Arizona, went to Arizona State University and have been here ever since.

What kind of staff do you have?

Everything is managed out of Phoenix. We have five full-time staff and then two part-time staff. We’re actually looking for office space, but right now we work out of a mother-in-law suite out of the back of my house. We keep growing and growing and growing. It’s one of those things where you create something and you have no idea what it’s going to turn into. We just love doing it.

The two of us that are the founders here still work full-time jobs. I work for the third largest computer company in the world and I know the difference between corporate America and a running a nonprofit like this. We were guests at a VFW convention in 2010. We were still young then. We were only doing about 30,000 tickets a year. But we talked to the head commander of the VFW. He came up to us and said, “I’ve been doing a lot of research on you guys. If you do this right, you can become the biggest, the baddest, the best veteran nonprofit there is.”

We’ve continued to do it right, something that’s supported by our growth and by our testimonials and by what our donors think about us. We always think that our donors are doing us such a huge favor that sometimes we forget about the fact that we’re doing a huge favor for our donors too by filling their empty seats. Plus, on average, when our veterans and active duty military go to these events, they’re going to spend $100-$150 at these venues, parking and restaurants. So not only are we impacting our veterans and our active duty military and their children and their family and friends, but we’re also impacting the community. It’s a crazy win-win scenario that we didn’t expect and just continues to just amaze us.

We have two programs. We’ve been talking about Tickets for Troops, where we collect tickets and give those away to active duty military families and the families of those killed in action.

We have another program called Hero’s Wish. Hero’s Wish is we allow a one-time wish for troops six months prior to deployment, on leave from deployment, and six months after deployment. It’s also for severely wounded warriors and families of those killed in action. We go out and try and fulfill that wish. 90 percent of our wishes are from families who want to go to Disney World or Disneyland. In the past two years, every Hero’s Wish that has been entered on out website has been completely fulfilled. When you got to VetTix​.org, you’ll see that on the Hero’s Wish tab. We average about 70 to 80 wishes a year. The testimonials and the stories associated with those wishes being fulfilled are awesome.

Do you take donations to help fund those wishes?