Swedish heavy metal heroes SABATON are proud to announce that they have partnered up with Veteran Tickets Foundation, also known as Vet Tix, for select 2019 U.S. dates of “The Great Tour.”

Vet Tix is the number one nonprofit working to provide free tickets to currently serving military and veterans of all eras, including immediate family of troops killed in action. SABATON are honored to support U.S. service members and vets by providing them with an avenue to create long-lasting memories through the live concert experience. A limited number of will call tickets are available at VetTix.org for select U.S. dates this October – November.

To receive tickets, military personnel and veterans apply at VetTix.org and are verified by a third party. Members can then set their event interests and are notified when tickets to an event meeting their criteria are available. Members then request tickets and Vet Tix distributes tickets at times using a lottery.

Vet Tix is a national non-profit, founded in 2008, whose mission is to secure and distribute tickets to sporting events, concerts, performing arts, educational and family activities across the nation to military and veteran families. Their goal is to help reduce stress, make events affordable, minimize post-traumatic stress, strengthen family bonds and encourage VetTixers to re-engage with local communities and American life. To date, Vet Tix has given out over 7.8 million tickets in all 50 states and Washington, D.C.

Swedish heavy metal heroes SABATON will make their triumphant return to North American this fall for “The Great Tour.” The headline excursion will feature support from special guest HAMMERFALL, and will begin in Ft. Lauderdale, FL on October 4th and will end in Silver Spring, MD on November 3rd.

Tickets are available for purchase at www.sabaton.net/tour.

“NORTH AMERICA, prepare for a Swedish invasion! We will reach your shores in early October with our new album The Great War, a bigger production than before & the templars of steel in Hammerfall as special guests! Get ready for a damn good dose of Swedish heavy metal!” – SABATON

SABATON’s trek to North America coincides with the band’s upcoming 20th Anniversary and their ninth full-length record, The Great War, which is out worldwide via Nuclear Blast Records.  Keeping with their tradition of metallic battle hymns about the feats of man in wartime, the new record is a concept album dedicated entirely to the World War I.

The Great War is available in these editions and formats:

HISTORY EDITION (Watch Presentation Video)
The full album including narrated parts introducing each song.
These narrations are merged, not as separate tracks.
The History edition is available on CD Digipak, vinyl and digitally.

THE SOUNDTRACK TO THE GREAT WAR EDITION
Instrumental versions of The Great War, available digitally (full album) + exclusively as part of THE GREAT BOX EDITION on CD (full album) and vinyl (10 tracks).

Listen and add the album to your collection here: http://nuclearblast.com/sabaton-thegreatwar

The band started the recordings exactly 100 years after the end of the First World War (11/11/1918) and took 3 months of intensive work to complete the album together with their long term producer and partner Jonas Kjellgren at Black Lounge studios. Furthermore, the album has been mastered by Maor Appelbaum and the artwork was once again created by Peter Sallaí.

“This is not the first time we have sung about stories from this period in time, but now we felt the timing was right to make a full concept album about this war,” explain the band.

Alongside the album, the Swedes have worked hard to make their 20th year anniversary a very exciting year, and also started the SABATON History Channel – a unique collaboration between the band themselves and multimedia historians Indy Neidell and Timeghost -capturing the power of social media to tell stories about the wars, battles and heroes behind SABATON’s songs.

“This is the biggest album we have taken on so far. There is more depth and story around the songs that we have ever had before,” Pär Sundström announces. “Expect many surprises as we have tried new things and we also went back in time to a concept we know a lot of you love. The Great War has been created side by side with the Sabaton History Channel to make 2019 the most exciting year in our 20 year history.”

About Sabaton
In the nearly two decades since their launch, Swedish metallers SABATON have carved out a reputation as one of the hardest working bands in the business – gaining a legion of loyal fans across the globe, delivering nine highly-rated studio albums (including two certified platinum-sellers), and scoring multiple industry award wins and nominations… not to mention launching their own annual festival and cruise.

Combining soaring power riffs with vocalist Joakim Brodén’s instantly-recognisable gruff baritone, the band refuses to be simply slotted into a genre. Fans need only know them as SABATON: the heavy metal band that sings of real life wars and the people who played a part in them – of gruelling campaigns and dazzling acts of bravery, of magnificent victories and touching personal struggles – true stories more fantastic than any fiction.

SABATON are perhaps best known for their electrifying live concerts, combining accomplished musical performances and a finely-crafted stage show – including their full-sized tank drum-riser – with energy and laughter. The band has headlined as far afield as North America, Australia and Japan, and regularly fills arenas and takes top-billed slots at festivals across Europe. 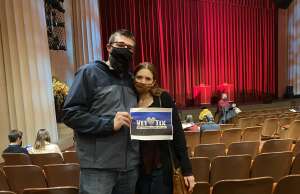 Jason McMurdy Posted:
I have never been to a ballet. This was amazing and touching. This experience gave us so much joy. My family loved this show very much. Thank you!
Read More From This Event
Dec 30th 2021 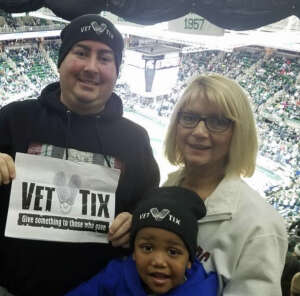 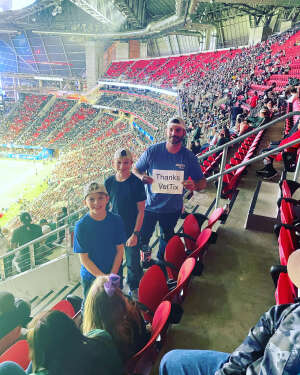 Dustin Posted:
Thank you Vet Tix for the awesome experience of the Peach Bowl , it was a blessing to be able to take my family to see their first college football game in person !
Read More From This Event
Nov 9th 2021 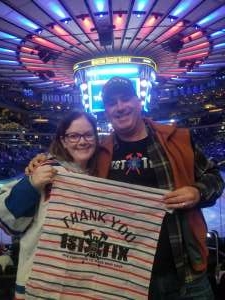 Mike Posted:
Thank you for the tickets! My sister and I had a great time watching the Rangers WIN!!!!
Read More From This Event