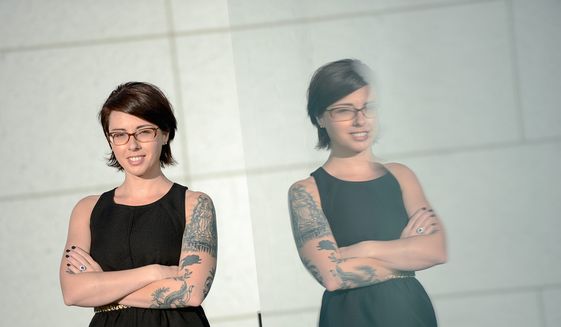 Kate Hoit served eight years in the Army Reserves, including a tour in Iraq, but when she tried to join her local Veterans of Foreign Wars chapter, someone asked whether she needed an application for military spouses instead.

Now, Ms. Hoit said, she will never join the VFW or the American Legion. She said the organizations are unwelcoming and out of touch with the needs of post-Sept. 11 veterans who served in Afghanistan and Iraq.

“I’m not going to go the VFW or the Legion and drink and smoke cigarettes,” she said. “I want to be out in my community.”

SEE ALSO: Obama: Nation must ‘move heaven and earth’ to ensure veterans are cared for

Her complaint is echoed by other veterans of the war on terrorism, who see the venerable veterans groups as fraternities of older men from previous wars. The new generation of veterans instead is gravitating toward groups organized around activities such as running or volunteering, and groups that allow nonmilitary members to take part as well.

Younger veterans say the traditional organizations differ in many ways from groups that appeal to them, including the types of advocacy they do and their ways of communication — “snail mail” versus email.

Officials from the Legion and VFW say they are trying to maintain the valuable clout they have built on Capitol Hill and need support to help veterans navigate the bureaucracy of the Department of Veterans Affairs — benefits that the more modern groups don’t provide.

It’s a challenge for the traditional veterans organizations, who agree they need to change to stay relevant.

Post-9/11 veterans say a typical experience at a local post involves walking into a dimly lit hall only to find unwelcoming veterans 30 years older who are having drinks at 10 a.m.

“It’s just the most depressing place,” said Sgt. Matt Pelak, an Army veteran who spent three years in Iraq and still serves in the National Guard. “I can’t imagine a place that is further removed from my generation of veterans.”

Veterans also said such groups deepen the divide between civilian and military worlds because only veterans are allowed to join.

More Iraq and Afghanistan veterans say they are joining groups that allow them to stay active, continue to serve their country and interact with civilians to help reintegrate into society after serving overseas.

Team Rubicon lets veterans serve alongside civilian first responders and “get dirty” when a natural disaster strikes, enabling them to maintain skills they learned in the military, said Sgt. Pelak, director of strategic partnerships at the 4-year-old California-based organization.

Capt. Mullaney, who transitioned to the Army Reserve in 2010, said because it’s important for younger veterans, who have been part of an all-volunteer force, to be able to continue to serve their community and country. He said traditional organizations now consist primarily of Vietnam-era veterans, many of whom were drafted and tend to have “a different view of your service and what your nation owes you.”

Both the VFW and American Legion say Vietnam-era veterans make up the largest portion of their membership. Only about 15 percent of Iraq and Afghanistan veterans who are eligible to join the VFW have done so.

Membership in the VFW, which marked the 100th anniversary of its founding last month, peaked at 2.1 million in the early 1990s. That is down to about 1.3 million today, and the average age of members is nearly 70. The American Legion claims 2.4 million members, down from 3.1 million two decades ago.

Lynn Rolf, a former Army captain who served in Iraq, couldn’t wait to join the VFW, saying it was an honor to become a member of the same organization as his father and grandfather. Once at the post at Fort Leavenworth, Kansas, however, he started to see some behavior he didn’t like.

“They didn’t like the young guys, they didn’t think we knew what we were talking about. It wasn’t very family-friendly,” Mr. Rolf said. “But now it is.”

Rather than drop out, Mr. Rolf recruited his friends to join, took on leadership roles and changed the organization into something that fits his needs. When he hears the common complaints from Iraq and Afghanistan veterans, the VFW Western Conference vice chairman tells them to do the same thing and “force change.”

Part of the problem in recruiting younger veterans may be the VFW’s difficulty in explaining what services it provides, including legislative advocacy on Capitol Hill or helping veterans submit disability benefits to get the money they are owed quickly, Mr. Rolf said.

He said most younger veterans think of the local VFW post as just a bar.

Randi Law, a spokeswoman for the VFW, acknowledged it’s a common misperception that the organization is “working diligently to overcome.”

She said many posts have closed their food service operations, become smoke-free and begun offering amenities such as exercise equipment and playgrounds. Posts that don’t evolve, she said, face “an uncertain future.”

The VFW’s latest push to recruit younger members will send troops who enrolled in college after the military to Capitol Hill to lobby for veterans’ needs with VFW staff.

The American Legion also is working with students to recruit younger veterans by opening several posts on college campuses over the past five years, said Matt Herndon, deputy director of membership. These groups allow students and faculty who served to support one another and provide help in searching for work.

Mr. Herndon said student veterans who get involved in the Legion during college may be more likely to continue their membership and bring new ideas to posts after graduation.

But the organizations also acknowledge that they need to do a better job of explaining what they offer, including assistance with benefits claims, scholarships, grants, free calls home for deployed service members and advocacy in Washington.

“People are usually surprised to learn how much of an impact the VFW has already had on their lives,” Ms. Law said. “Without the VFW, there would be no VA. There would be no compensation, no benefits, no one to ensure our veterans and military families are cared for after serving our country.”

VFW service officers, who are familiar with VA bureaucracy and paperwork, can submit forms on behalf of veterans, help file appeals if disability benefits are denied, or simply offer advice to those who want to file their own disability claims regardless of whether the veteran belongs to the VFW.

Over the past two years, more than 200,000 veterans have taken advantage of the help and collectively obtained almost $6 billion in benefits from the VA, Ms. Law said.

Sgt. Pelak said his generation is grateful for the organization’s lobbying work on programs such as the G.I. Bill, but that’s not enough to recruit younger veterans.

Meanwhile, other organizations have stepped up to lobby for post-9/11 veterans.

Lt. Cmdr. Sean Foertsch, a Navy reservist who served in Afghanistan, said younger veterans typically don’t need service organizations to fight for the benefits they were promised. He said military personnel have largely been spared from the budget cuts that have hurt other parts of the federal government because of overwhelming public support for troops.

Lt. Cmdr. Foertsch, who decided not to renew his Legion membership this year, said older veterans groups are “more interested in being a political player than actually addressing the needs of vets.”

The groups that are popular with post-9/11 veterans, he said, are more focused on helping with reintegration into the community.

“That is where the models of Team RWB and Rubicon seem to gain more traction with younger vets — they are focused on the ‘who’ the veteran is as opposed to the ‘what’ they get from” veterans organizations, he said by email from Liberia, where he has just deployed to fight Ebola.

Bryan Allyn, a former Navy petty officer who served in Afghanistan, decided not to renew his Legion membership after two years. He said the VA has advocates to help him navigate the benefits process and he would rather cut out the middleman and do the work himself.

A Legion membership still offers exclusive discounts, such as 20 percent off prescription drugs and savings at hotels, but Mr. Allyn said other groups provide benefits that may be more appealing to younger veterans, such as VetTix.org, which gives free concert and sports tickets to veterans and their families.

“Basically, I was paying a fee but all I was getting was some address labels and discounts on rental cars and stuff,” he said. “Other than that, there was really nothing that was of benefit.”

Younger veterans say the problem extends even to how the groups communicate. The Legion’s postal letters often end up in the trash, Mr. Allyn said. Instead, Team RWB and Team Rubicon use social media, which connects large numbers of veterans across the country.

Older veterans said the traditional organizations have a legitimacy that can’t be conveyed by having 10,000 “likes” on Facebook, and they fear lawmakers on Capitol Hill won’t take the new organizations’ lobbying as seriously.

Mr. Herndon said the Legion is trying to use more social media such as Twitter and Facebook to communicate with members, though he acknowledged it could do better. He said the Legion has several “cyberposts” where veterans participate in meetings and talk with other members online through chat rooms or video conferences.

The VFW’s Mr. Rolf said veterans should feel welcome to join the old and new organizations.

While at the Kansas VFW, Mr. Rolf worked with members of Team Rubicon on tornado relief and knew it was a service group he wanted to join. After spending a lot of time on the road and putting on some weight, Mr. Rolf joined the fitness-oriented Team RWB and has lost 75 pounds running and participating in cross fit with the group. He now holds leadership roles in both of these groups and said they need to work more with traditional veterans groups — and vice versa. 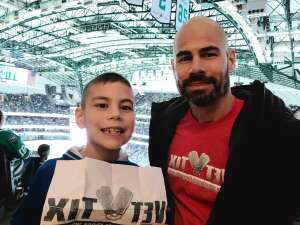 Tim Posted:
Huge shout out to the Dallas Stars and the VetTix Team. Thank you for the opportunity to attend this game with my son, we both had a blast!
Read More From This Event
Nov 28th 2021 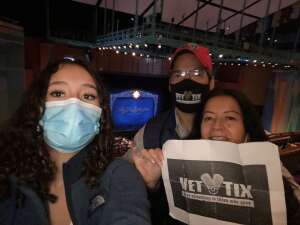 Diego Rosales Posted:
Thank you Live Nation and Vettix for the tickets. Great start to the Christmas season. We really enjoyed the show.
Read More From This Event
Nov 28th 2021 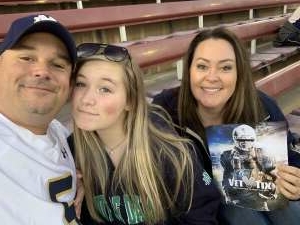 Daric Posted:
First Notre Dame football game for the family. We had an awesome time and appreciate the tickets.
Read More From This Event
Oct 30th 2021 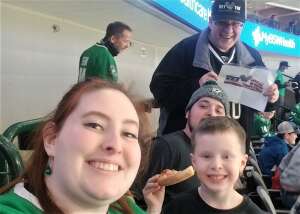 Kenneth Farmer Posted:
A big thank you to the Dallas Stars organization for the donated seats. We had a great time and great seats. We will definitely be going back again. Appreciate our Vettix sponsors so much.
Read More From This Event