One VetTixer gets a glimpse into the man behind the legend

Check out our first VetTixer guest blog as Donald highlights his unique experience at a recent Kenny Chesney concert. 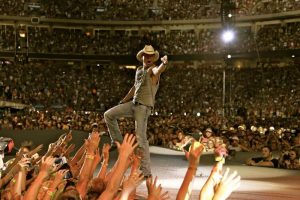 After attending a recent Kenny Chesney concert through Vet Tix, I came away with wonderful memories and profound respect for the man, as well as the artist. He’s an artist who not only gives his all, but also brings with him some of the top talent in the industry, creating an event that can only be described as memorable. It’s a Kenny Chesney experience, not just a concert.

I’ve heard that Mr. Chesney likes to mingle with the crowd sometimes either before, during or after his shows. And on that night, he came and sat right in front of my wife. He was dressed in typical Kenny fashion: jeans, tank top, sandals and a baseball cap. My brother-in-law and I were going nuts while of course, the ladies were cool and calm.  He spent the first act singing along with the songs, looking around and casually talking with all of us – not once did he mention his name.  When we told him he looked a lot like Kenny he simply said: “Yeah, I get a lot of that.” Interestingly, my brother-in-law and I are retired old vets and the only ones around that area that night that even appeared to be former military. But Mr. Chesney, after the first act was over, got up, said he had to go but wanted to thank us for our service – we were blown away.  He had to have known we were vets. That’s a class act. 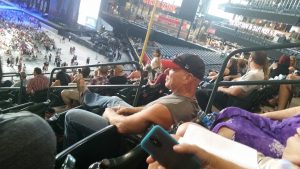 When it came time for the mystery man himself to perform, he did not disappoint. He’s a man that runs, jumps, moves and sings like a kid half his age. The sound, the lights, the songs and show were exactly what you would expect from a superstar. Hit after hit, song after song, the momentum never slowed. He thanked the audience for coming and “allowing” him the chance to play for us. He was the epitome of grace and humility, the mark of a great entertainer. He came out dressed exactly like you’ve seen him on album after album: jeans, boots, the big white hat and white tank. And just like the great entertainer he is, he started to bring back some of the night’s opening acts to sing with him, proud to share the spotlight with the newcomers.  Old Dominion joined him for the song “Save It for a Rainy Day.” Then Thomas Rhett joined him for “When the Sun Goes Down” and David Lee Murphy for his biggest hit “Dust on The Bottle.” After that it was all Kenny Chesney as he performed decades of his greatest hits and finished the show off with two encores. I can tell you with all certainty that no one left unsatisfied or unhappy that night.

I’d like to say that none of the memories and experiences my wife and I have had would have been possible without the generosity and support of the Vet Tix program and their donors.  What a wonderful organization that truly cares for our military and their families!  They offer a wide variety of event tickets, including family performances, comedy tours, concerts, major sports games and more for only a small processing fee of up to $14.97 – that’s $14.97 total, not per ticket. Vet Tix has provided me with the opportunity to see so many things since I joined in July of 2017. Here are some of the fantastic shows I’ve seen in just one year:   Happy Together Tour, Deep Purple with Alice Cooper, Foreigner (40th Anniversary) with Cheap Trick, Gaelic Storm, Arizona State Fair, Music Of the Knights (tribute to sirs Paul McCartney, Elton John and Andrew Lloyd Webber),  Celtic Nights, The Doobie Brothers, Sgt. Peppers 50th Anniversary with Classical Mystery Tour (Beatles tribute band with full orchestra recreating the entire Sgt Pepper’s album with other elect cuts), Sugarland, Kenny Chesney, and just this past Friday, Chris Isaak.

I can tell you that there was no way I would have been able to attend these without the Vet Tix program.  Cost aside, I’d probably miss half of them without the help of Vet Tix sending me notifications of offerings meeting my preferred criteria.  Thank you to Vet Tix and all your partners and donors for making these experiences possible!

We’re grateful for donors like Messina Touring Group who make these unique experiences possible. Thousands of VetTixers have been able to enjoy concerts from the ‘Trip Around the Sun Tour.’ The tour highlights Kenny Chesney’s release of a very special and personal album titled “Songs for the Saints,” a project that is dedicated to focusing on the spirit, trauma and perseverance of those islanders affected by Hurricane Irma which decimated the Virgin Islands. Proceeds from the sale of “Songs for the Saints” go to Love For Love City Fund benefiting Hurricane Irma Disaster relief for the U.S. and British Virgin Islands. 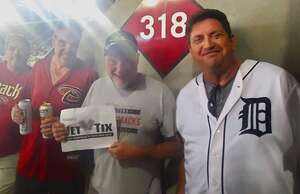 Leonard Posted:
Thanks for the tickets Arizona Diamondbacks! we saw a great game with lots of runs. Appreciate the seats!
Read More From This Event
May 17th 2022 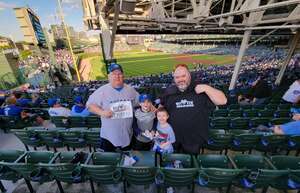 John Posted:
Thank you Vettix!!! Great game!!! It was my grandson's FIRST Cubs game!! My son and two of my grandson's had a wonderful experience!!!! We got to see a Grand slam and a Cubs win!!!! We also received military appreciation hats!!! I met several veterans and was able to share how the Vettix process works and taking photos and giving feedback. Extremely enjoyable game!!! Thanks to Cubs and Vettix staff for all they do 4 us!!!!
Read More From This Event
Jun 25th 2022 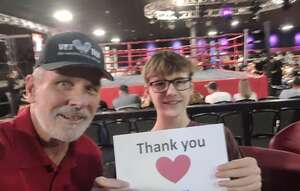 Steven Posted:
My son and I would like to thank the VetTix sponsors for providing us an opportunity to experience a Muay Thai event for the first time. We had a fantastic time. We can't wait to attend the next event!
Read More From This Event
Jun 11th 2022 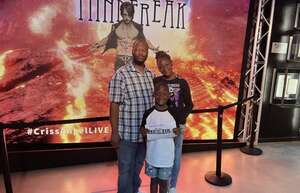 Christian Posted:
Thank you to Caesar’s for donating tickets to Amystika. It was a great show and Chris Angel himself was there.
Read More From This Event