Phoenix, AZ – America’s # 1 Gold Record Award Winning Group of all time in all categories KISS have partnered with Hiring Our Heroes (HOH) and Veteran Tickets Foundation (Vet Tix) to salute members of the National Guard and military Reserve forces in over 30 U.S. cities during their 2016 ‘KISS: Freedom to Rock’ tour.

KISS will hire a currently serving member of the National Guard or Reserve force to be a “Roadie for the Day” for each of the 32 U.S. concerts. In addition, KISS will donate a limited number of tickets to veterans in each community and distribute those tickets through VetTix.org. Veterans and their family members will also have the chance to purchase discounted tickets through Vet Tix. Military discounts will also be available at venue box offices with proof of a valid military ID in select markets around the country. Please note this offer is not available in all cities – please consult www.kissonline.com for exact details.

The U.S “KISS: Freedom to Rock” tour stops are all home to a large number of Army and Air National Guard or Army, Navy, Air Force and Marine Corps Reserve members. Since September 2001, hundreds of thousands of Guards and Reserve members have been recalled to active duty, and many have deployed to Iraq and Afghanistan. Nearly 900 of these brave men and women made the ultimate sacrifice.

KISS’ founder Paul Stanley said “KISS is celebrating our “Freedom To Rock” tour this summer; the same freedom that’s been upheld by our veterans and active duty service members”

KISS’ other mastermind Gene Simmons stated, “We are proud to partner with HOH and Vet Tix to highlight the incredible commitment and sacrifices of hometown heroes serving in the National Guard and Reserve forces. Many of these heroes have given a lot—and some have given all—and we will honor them in every town we tour.”

From the President of Hiring Our Heroes and a Vice President at the U.S. Chamber of Commerce, “Our members of the National Guard and Reserve are called upon at a moment’s notice and they drop everything to respond. It is fitting that we honor these often invisible heroes in their communities and hometowns as part of the ‘Freedom to Rock’ tour,” said Eric Eversole.

“Getting the opportunity to partner with Hall of Fame rockers is an amazing opportunity,” said Mike Focareto, CEO of Vet Tix. “KISS fans get much more than live music and a pyrotechnics show; they get a chance to create unforgettable memories with their family and friends. We’re excited to make this experience possible to our Vet Tix family.”

About KISS
As America’s #1 Gold Record Award winning group of all time, and that’s in every category, KISS can easily be named one of rock’s most influential bands. The Rock N Roll Hall of Famers have released 44 albums and sold more than 100 million albums worldwide.  Honored by their peers, KISS received the illustrious ASCAP Founders Award in 2015.  Over 40 years of record-breaking global tours have brought KISS to their fans. They kicked off their recent world tour with 5 headlining shows in Japan and a #1 single in 2014 “Samurai Son” with pop group, Momoiro Clover Z.  Their 40th Anniversary World tour also rocked North America, South America and Australia.  Additionally, once a year the “KISS Army” becomes the “KISS Navy” as fans from across the globe board the KISS Kruise (this year will be their 6th voyage). KISS teamed up with Warner Brothers in 2014 to create the well-received original movie ScoobyDoo and KISS: Rock And Roll Mystery. Other high-profile appearances have included the Super Bowl, the Winter Olympics, Rockin’ The Corps concert, a FOX alliance with KISS appearing in multiple episodes of Family Guy, plus two special guest performances on American Idol finales. KISS has been featured in major advertising and marketing campaigns for John Varvatos, Google Play, Hello Kitty— even appearing  in a Dr. Pepper Super Bowl commercial and advertising campaign in support of their Hottest Show On Earth tour. This year represents the 3rd season of the LA KISS Arena Football League team bringing professional football back to Los Angeles.  KISS founding band members Paul Stanley and Gene Simmons have also entered the culinary world by opening a string of successful restaurants aptly named Rock & Brews. KISS is dedicated to numerous Veterans Organizations including: Vet Tix, The Wounded Warriors Project, The USO, The U.S. Chamber of Commerce “Hiring Our Heroes” program, The Legacy Organization in Australia, Help For Heroes United Kingdom and The Dr. Pepper Snapple Groups Wounded Warriors Support Foundations. For more information, visit www.KissOnline.com

About Hiring Our Heroes
Hiring Our Heroes, a part of the U.S. Chamber of Commerce Foundation, is a nationwide initiative to help veterans, transitioning service members, and military spouses find meaningful employment. Working with our vast network of state and local chambers and other strategic partners, Hiring Our Heroes has helped hundreds of thousands of veterans and military spouses find meaningful employment through more than 1,000 job fairs in all 50 states, Puerto Rico, the District of Columbia, and on military installations overseas; a suite of free online resources; and the Hiring 500,000 Heroes campaign.

About Veteran Tickets Foundation (Vet Tix)
Veteran Tickets Foundation (Vet Tix) is a national 501(c)(3) nonprofit foundation supporting our military community. Vet Tix has provided over 2 million free event tickets to currently serving military, veterans and family members of those killed in action to sporting events, concerts, performing arts and family activities. Our military and veterans experience many difficult transitions as they reintegrate into their families, communities, and eventually, into civilian life. Attending events improves morale, strengthens family bonds through shared interests and encourages service members to stay engaged with local communities and American life. In gratitude for their service and to support their reintegration, Vet Tix is dedicated to giving back to those who gave us so much. Donations are eligible for tax deductions. Please visit our web site at www.VetTix.org Follow us on Twitter  and Facebook.

“Freedom To Rock” Tour Dates include: 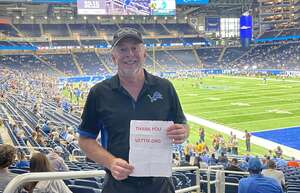 Gregory Posted:
A great big THANK YOU to The Detroit Lions and Vettix for providing me with 4 tickets to the pre-season opener. I was able to enjoy the game with three good friends from high school. We all really enjoyed ourselves and we thank The Detroit Lions for that experience. It's so important and appreciated by those of us who have served. I can't tell you how much that it's appreciated.
Read More From This Event
Jul 13th 2022 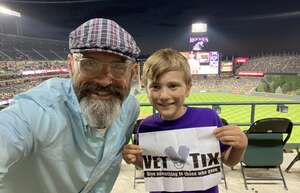 Mark Posted:
Thank you Vet Tix, Colorado Rockies & supporting partners for a wonderful night at the ballpark. Our family had a blast & the Rockies won!!
Read More From This Event
Jul 27th 2022 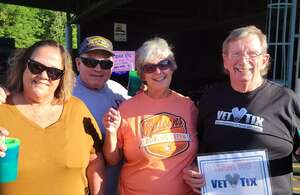 Clarence Posted:
We would like to take this opportunity to thank Live Nation and Vet Tix for the tickets to see this great show. We were able to take a trip down down memory lane. We had a wonderful evening. Thank you so very much
Read More From This Event
Sep 27th 2022 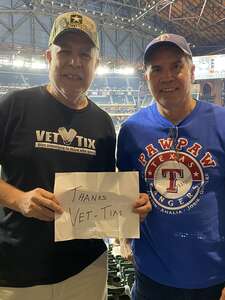 Jose Juan Posted:
Thank you Vettix and Texas Rangers for the opportunity to attend this event. It was a great game, had an awesome time. Thank you so much again
Read More From This Event