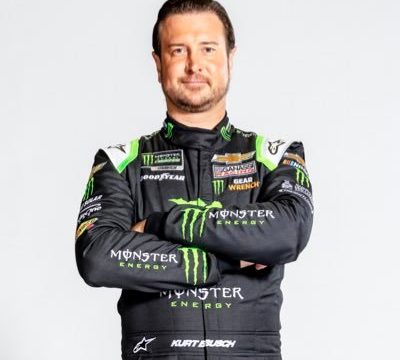 NASCAR Cup Series (NCS) competitor and former champion, Kurt Busch, will serve as the Grand Marshal for the NASCAR Gander RV & Outdoors Truck Series (NGROTS), Vet Tix Camping World 200 at Atlanta Motor Speedway on Saturday, March 14. Busch started his NASCAR National touring series career racing in the NGOTS in 2000 and was a four-time winner in NGROTS competition, in just one full-time season on the circuit.

Vet Tix is a national 501 (C)(3) which has provided more than 9 million event tickets to the military and first responder communities since 2008. The mission of Vet Tix is to give back to those who have served our nation as active-duty military, reserves, veterans, and first responders.

In 2019, Busch started the KB100, which made a personal commitment to offer 100 tickets to every NCS race through a partnership with Vet Tix. Last season more than 50,000 veterans and active servicemembers requested the nearly 4,000 available tickets. In 2020, Busch announced plans to enhance the offering to Vet Tix members by encouraging other drivers, sponsors, and industry partners to consider matching his offer of 100 tickets to each race creating the KB100 Plus ticket giveaway. In just the first four races of the season several drivers such as Dale Earnhardt Jr., Kyle Busch, Riley Herbst, Jimmie Johnson, and Alex Bowman, have already supported the additional Vet Tix offering.

Kurt Busch, Grand Marshal, Vet Tix Camping World 200: “I am honored to be selected as the Grand Marshal for the Vet Tix Camping World 200. I have enjoyed a great relationship with Vet Tix over the past year. It’s a great organization; not only for their support of the KB100 Plus program but for what they do to help get active service members and veterans to hundreds of events around the country. I have a great appreciation for our nation’s military members and veterans and am proud to be a small part of what Vet Tix does to service that community”.

“We are beyond excited to have Kurt Busch be the Grand Marshal of the Vet Tix Camping World 200. Our motto is “give something to those who gave” and Kurt defines that like no other. He has, on his own accord, been one the most significant ambassadors to our current serving, veterans and first responders in our program’s history. Kurt and his KB100+ initiative create countless memories to our NASCAR-seeking VetTixers at every race. Thank you, Kurt, for being the final piece of the puzzle of what’s going to a very exciting race.”

Veteran Tickets Foundation (Vet Tix), a national 501(c)(3) nonprofit organization, provides free tickets to sporting events, concerts, performing arts and family activities to currently serving military, National Guard and Reserves, veterans of all eras, the immediate family of those killed in action, and VetTixers’ caregivers. Since 2008, Vet Tix has provided over 9 million free event tickets to more than 1.5 million members. In 2018 Vet Tix launched 1st Tix, which provides the same service to our nation’s current and retired law enforcement officers, firefighters, and EMTs. These events help service members, veterans and first responders reduce stress, strengthen family bonds, build lifelong memories, and encourage them to stay engaged with American life and their local communities. Vet Tix spends over 95 percent of its revenue on programs, ensuring that we give back to those who have given so much. Visit VetTix.org and 1stTix.org to learn more, and follow us on Instagram, Twitter, and Facebook.

About KB100 Plus Ticket Giveaway:

In 2020 Kurt Busch announced plans to enhance his offer to provide 100 tickets to every NASCAR Cup Series race through a partnership with Veteran Tickets Foundation (Vet Tix). In addition to his 100 tickets offered, he has called upon other NASCAR Industry stakeholders such as drivers, sponsors and tracks to match his offer to bring more Vet Tix members to the race track on a weekly basis. In addition to the match fans can also make donations to Vet Tix to help support their mission in providing free tickets to sporting events, concerts, performing arts and family activities. 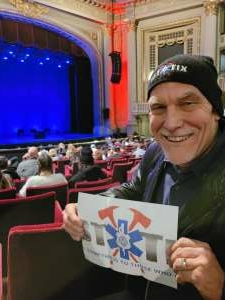 Terry Posted:
Would like to thank AEG and 1st Tix for the tickets to Rob Bell tour. This was a great family outing. It was good to get out and be a part of this event.
Read More From This Event
Mar 11th 2022

Niel Posted:
Thank you Arcadia All-Fla Championship Rodeo, my guest and I had a great time. The seats you donated were perfect thank you again for a great experience.
Read More From This Event
Apr 26th 2022 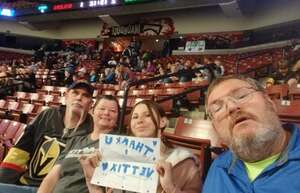 David Posted:
We had an enjoyable time with our Hockey local team. Thank You Utah Grizzlies for an opportunity in seeing a Playoff Game and Thank You to Vettix for creating the Forum to making it happen. We brought a friend is is a Disabled Vet and introduced him to Vettix...he will be joining soon.
Read More From This Event
Apr 17th 2022

Camilo Posted:
Thank you NY Yankees. My son and I had a great time at this game. We look forward to more visits and more memories!
Read More From This Event