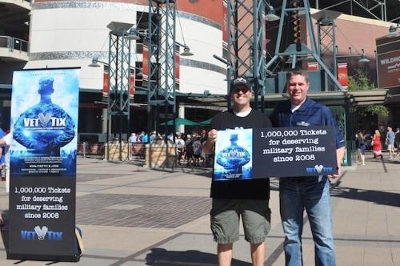 PHOENIX, July 19, 2014 /PRNewswire/ — Vet Tix, a national nonprofit foundation that provides free event tickets to currently serving military, veterans and their family members and the immediate families of those killed in action, announces it has given away its one-millionth ticket. The milestone ticket is for tonight’s Arizona Diamondbacks-Chicago Cubs baseball game at Chase Field, Phoenix. 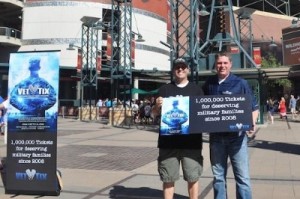 Vet Tix supports all branches of the U.S. military community, and since it’s founding in 2008 has distributed tickets in all 50 states. In addition to providing free tickets to sporting events, Vet Tix distributes tickets to concerts, performing arts and family activities as well, with the goal of improving mental welfare and enriching the lives of military service members and veterans.

Vet Tix works with many professional sport teams within the NHL, NFL, NBA, WNBA and MLB, in addition to NASCAR, concert and entertainment promoters. Where there are empty seats, Vet Tix seeks to fill them. Even season ticket holders are encouraged to donate their tickets to Vet Tix for games they can’t make, and receive a nonprofit tax write-off. Inclusively, all team sponsors that purchase tickets for the military are provided with a tax write-off.

Army veteran Jason Ohanian, who was based at Fort Hood and served in Kuwait and Afghanistan from 1999 to 2003, is the millionth ticket recipient. “It made my day,” Ohanian said, after being notified by Vet Tix that he would receive the ticket which represents the significant efforts of Vet Tix and its donors and partners who supply the tickets to benefit those who have served our country.

Ohanian said, “I got a voicemail from Eddie Rausch, the chairman and chief operating officer at Vet Tix, and the message was, ‘Please call about your tickets.'” At first Ohanian thought something might be wrong. He remembered awhile back getting tickets from Vet Tix for a spring training game that he and a friend were unable to attend because he’d been involved in a car wreck.

“But once I spoke to Eddie and got the news about the millionth ticket, I was shocked and honored,” Ohanian said. “So we had missed a spring training game with my home town team, the Rangers, but now we’re going to a real game.”

Sports fan Ohanian says he’s applied for game tickets from Vet Tix three or four times a year since he was made aware of the organization. “I found out about Vet Tix from the Vet Center at Arizona State University when I was getting my MBA.” He’s now working for American Express and he uses the company’s Veteran’s Network to tell others about it.

“It’s an amazing experience to be at a sporting event, like the Fiesta Bowl, and being surrounded by a couple hundred other people from the military and their families. It’s a brotherhood and it’s special when we’re all together,” he added.

“We at Vet Tix are very pleased to be sending U.S. Army veteran Jason Ohanian to a baseball game and, in our sixth year of giving away tickets, are happy to be successfully supporting the military community. We look forward to celebrating our one-millionth ticket giveaway tonight,” said Michael Focareto, Vet Tix founder and U.S. Navy veteran.

Veteran Tickets Foundation (Vet Tix) is a national 501(c)(3) nonprofit foundation supporting our military community. Vet Tix provides free event tickets to currently serving military, veterans and family members of those killed in action to sporting events, concerts, performing arts and family activities. Our military and veterans experience many difficult transitions as they reintegrate into their families, communities, and eventually, into civilian life. Attending events improves morale, strengthens family bonds through shared interests and encourages service members to stay engaged with local communities and American life. In gratitude for their service and to support their reintegration, Vet Tix is dedicated to giving back to those who gave us so much. Please visit our web site at www.VetTix.org Follow us on Twitter and Facebook. 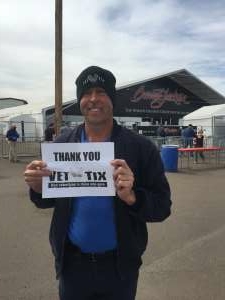 Fred Posted:
Thank you Barrett-Jackson Auction for a fun and thrilling day! Your support to the military is commendable! Thank you VetTix for making it happen!
Read More From This Event
Feb 7th 2021 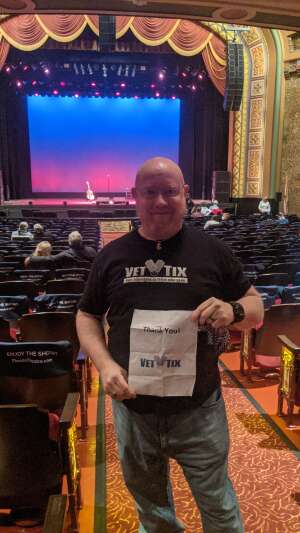 Adam Posted:
Thank you very much for the tickets. The wife and I had a blast! Thank you!
Read More From This Event
Feb 25th 2021 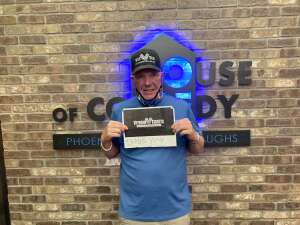 Richard Hart Posted:
I would like to thank House of Comedy for the tickets to see the show last night. I had a wonderful time. The comedians were so funny I haven’t laughed like that in a long time. Once again thank you. Richard
Read More From This Event
Jan 24th 2021

C.T. Green Posted:
Thank You to the Warren Miller Performing Arts Center - for the Tickets you Donated to see Behind the Curtain: Jeannette the Musical - Online/Virtual Performance on Saturday 23 January 2021. My girlfriend and I spent quality time in front of the computer screen streaming the show. It was a unique evening being able to look into how Broadway musicals come together. It was a great production brought together by Director Erin Ortman. A great story of America's first Congresswoman and her life. Enjoyed the music, dance, and awesome performances by all involved. We thank you for making the opportunity possible for us to view this event. We normally attend such performances in person, however under the circumstances during this time of COVID-19, it was a great escape. We remember how it was in the past and will be again in the future. We look forward to more such occasions and hope that you continue to do the great job that you do. Keep up the good work. Thanks again to the Warren Miller Performing Arts Center and Vet Tix!
Read More From This Event