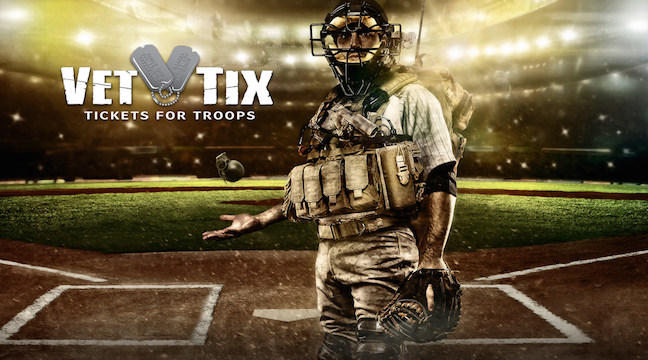 Vet Tix and OCC work with venues, promoters and teams to send troops to free events

In 2008, Mike Focareto, CEO of the Veteran Tickets Foundation, and a couple of buddies were sitting in the stands at University of Phoenix Stadium in Glendale, Ariz., for Super Bowl XLII. A friend of Focareto’s, a military member, came out with the color guard during the opening ceremony of the game. Afterwards, they were escorted off the field and not allowed to stay for the game. All along, an empty seat next to Focareto stayed empty the whole night. From that moment, the Veteran Tickets Foundation (Vet Tix) was born.

Today, Vet Tix teams up with sports teams, promoters, organizations, venues and season ticketholders to provide free event tickets to family members of troops killed in action, veterans and those currently serving in any branch of the U.S. military. Currently, Vet Tix has around 300,000 verified military in their system, a number that grows every day. In 2014, Vet Tix gave out over 400,000 tickets and since its start in 2008, has given out almost 1.3 million tickets in all 50 states.

As a national nonprofit 501(c)(3), 97 percent of every dollar that’s brought in goes back out for the program. And for the people who work there, the business is their mission.

“We all have military families,” said Brandi Shannon, chief community officer. “My husband served 15 years in the National Guard and was deployed to Iraq. My father served and retired 20 years with the National Guard. Our CEO is a veteran of the Navy. So, it’s near and dear to our hearts and any way that we can fill an empty seat and thank a military member and their family for their service and sacrifice, that’s what we’d like to do.”

What began using a method of reaching out to each individual group has expanded by word of mouth to the point where teams are coming to them. Vet Tix works with almost every MLB team and has sent military and their families to hockey games, NBA, NFL and NCAA games. Beyond sports, a lot of military families are eager to take their kids to Disney on Ice performances and other family shows as well.

Season ticketholders are also able to donate tickets to the program in exchange for a tax write- off. When someone sponsors or donates tickets, Vet Tix creates a donor account for them and when the event happens, the donor receives a thank you note and photos of the military who attended the event.

“They’re really able to connect with the donation they made, see where it went firsthand,” said Shannon, “and we’re also using those testimonials to get other sponsors to purchase tickets. It’s great when you can see where your dollars are going and who they’re benefiting.”

Shannon said they had a member with severe PTSD who was hesitant to go to any events at first, but slowly started getting tickets to things. Later, they got a call from the member’s doctor at the VA saying he’d seen a big improvement with the member.

“They go to these events and see other military, and they feel comfortable and part of a supportive community,” said Shannon.

Operation: Care and Comfort (OCC) started in San Jose, Calif., in 2003 with care packages for troops overseas. Once those connections began, some of the recipients started asking what OCC could do for their families at home. From those questions, the Tickets for Troops program began in 2004 with a San Francisco Giants game. Today, OCC works with a number of sports teams, venues and promoters like Live Nation to send military to a variety of events completely free, not charging service fees or shipping.

“Since we’ve been doing this for 10 years,” said Julie DeMaria of OCC, “all the sports teams in California pretty much work with us. Some of them will only work with us. Like the San Francisco Giants, we’re the only military organization they’ll give tickets to. With the San Jose Sharks, we are their exclusive partner, so we’re the only ones that when the season ticketholders push the little donate button, the tickets are automatically sent to us.”

DeMaria estimates they receive 100-200 tickets to 25-35 Giants games a season. In 2013, OCC gave out around 30,000 free tickets, with a face value of $1.5 million. As a nonprofit, all volunteer organization, only 1.7 percent of every dollar is spent on overhead. The rest goes directly to OCC’s programs. Beyond sporting events, OCC has sent military and their families to movie premieres, a monster truck event, a PBR event, museums, wineries and concerts.

“We work really hard to raise the money, so if we buy tickets, we expect the promoters to kick in and do their part to support the military too, and it works out fantastic,” said DeMaria.

The response to the program has continued to be positive, garnering lots of support from the community and local events. For the PBR event, OCC purchased 88 tickets and the promoter offered to match them for each one. Brad Ziegler, former Oakland A’s pitcher, purchases tickets to 20 A’s games a season with his organization Pastime for Patriots and donates them to OCC for distribution. DeMaria said SAP Center in San Jose, Calif. ,and AT&T Park in San Francisco will often come to them with tickets for a concert, and season ticketholders were great about donating tickets for the San Jose Sharks vs. LA Kings Stadium Series hockey game at Levi’s Stadium in Santa Clara, Calif.

“What’s really great about it is the interest grows every year,” said DeMaria. “We’ve partnered with the Golden State Warriors forever and it took a while, but now it’s incredible the relationship that we have. Now, some of their partners are really excited because they’re seeing what we’re doing together and now they’re coming in.”

At a recent care package drive with the Golden State Warriors, Sony got involved and donated PSP’s for every care package OCC put together.

“We haven’t spent a dime on advertising in the last 13 years,” said DeMaria, “but it just continues to grow because of the work we’re doing and our partners. I mean, you can’t get any better advertising than the San Francisco Giants and San Jose Sharks as somebody promoting us. We’re a little charity, but we do a lot of great stuff.”

About Vet Tix
Veteran Tickets Foundation is a national 501(c)3 non-profit foundation supporting our military community. Vet Tix provides free event tickets to currently serving military, veterans and family members of KIA to sporting events, concerts, performing arts and family activities.  Our military and veterans experience many difficult transitions as they reintegrate back into their families, their communities and eventually civilian life.   Attending these events improves morale, strengthens family bonds through shared interests and encourages service members to stay engaged with local communities and American life.    In gratitude for their service and to support their reintegration processes, Vet Tix is dedicated to giving back to those who gave us so much. Please visit our website www.VetTix.org